I am a skateboarder, and while out for a roll with my partner in crime (pictured drinking a fruit juice, below) today we came across this concrete block - which I believe represents a textbook study in conflicting business requirements, and is proof that the phenomena isn't limited to software engineering. 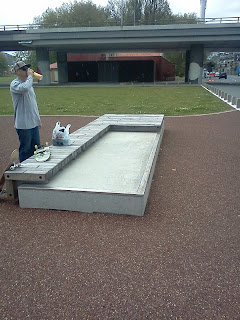 If you look closely, you'll see that the concrete block is equipped with a nice seat, and also, metal edging - what's that edging about? Well, the edging is specifically for the purpose of skateboarding - for example: 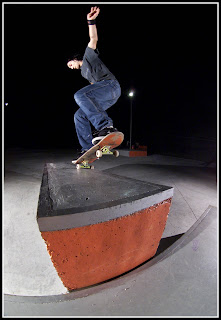 [This chap is doing a "nosegrind" - note the metal edging on that block...source: http://fotoradar.deviantart.com/art/nosegrind-on-the-ledge-58262230]

It's actually a fantastic idea, and one that has been used recently in other parts of Auckland and Wellington cities, I've noticed. Skateboarding is encouraged by doing this; which I think enriches the city's culture and enables creative/innovative use of features of the urban landscape, that would otherwise be for aesthetic purposes only.

Interestingly (and aside from the point of this post), and entire industry seems to have sprung up in recent years directed toward "skateboarding prevention" - that is, the deterrence of the use of concrete blocks for grinding/sliding/etc - here's an example:

...shame on them! Anyway, this is a departure from the point of the story...

So, yes - putting the metal edging on the concrete block is a great idea - full credit to whoever thought of that. And it works really well, right up to the point where the pavement surrounding the block has been carpeted with a very fetching, coarse red gravel - rendering the ledge un-skatable (gravel doesn't take kindly to skateboard wheels).

No doubt there is a satisfied councilperson blissfully signing off on a several thousand-dollar invoice to have metal edging added to this concrete block, while quietly patting themselves on the on the back for promoting urban culture and enabling a creative environment. And good on them too, that's awesome - maybe just give those business requirements a(nother) once-over before signing-off next time, aye people?

The moral of the story? Technology people; take consolation in the fact that you're not the only ones who suffer from conflicting business requirements!

Here's the location of the block FYI, in-case you'd like to see for yourself - downtown Auckland, near Victoria Park (you can see the block in Google Maps there, bang in the middle of the picture):