Visited the beautiful city of Melbourne for the first time in December this year. This was mainly for business, but I managed to get some sightseeing in also. The primary purpose of my visit was to meet with REA Group's CIO - Nigel Dalton - and take a look around their Agile implementation. This was certainly a worthwhile expedition. 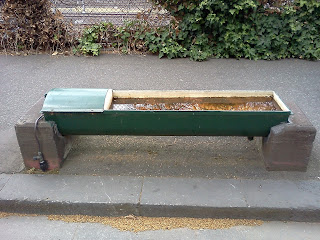 [Q: some trivia - I happened upon this device on the side of the road in Melbourne, what do you think it is used for (took me a little while to figure this one out)?]

If you're interested in Agile at all and you ever have the privilege of  attending an event at which Nigel is speaking (he's a fantastic speaker BTW), see if you can have him invite you for a tour of REA Group, or alternatively, his latest Agile initiative. Nigel is known affectionately I believe, as Australia's "Mr Agile" - I can see why now. I'm uncertain as to how free I am to discuss the ways that REA Group are applying Agile on my blog, however I can certainly say that they are applying the Agile philosophy in some highly innovative ways and are actively pushing out the boundaries of contemporary Agile application. Unfortunately my visit to REA Group was cut short due to my being more than an hour late for my allocated timeslot (sorry Nigel!), however the short time that I had with Nigel was enough - I came away feeling enlightened and with a refreshed sense of inspiration and affection for Agile, to say the least.

Of course, as I mentioned, I got to do some sightseeing around Melbourne also. Didn't have much time to spend, but probably the highlight for me would be looking around the art on display at the Ian Potter Centre, and also simply wandering around the various neat little alleys and side-streets that Melbourne seems to be so rich with. 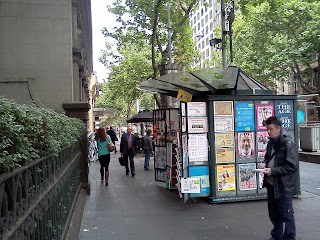 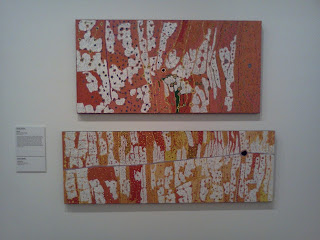 [Amazing Aboriginal art at the gallery] 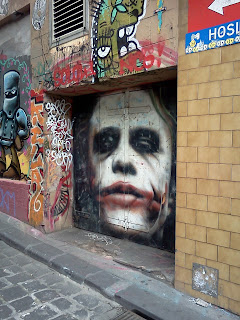 As a city, Melbourne does not make much sense to me, geographically. We also visited Sydney while in Australia, which gave me further food for thought on the matters of city-scape and geography. I am essentially a person who does not like to lose his bearings (or even feel slightly disoriented) - I am generally fascinated by maps and geography - however I have only pinpointed the source of my underlying sense of confusion about the place since I returned from Melbourne and meditated on the matter. It's not an easy concept to explain, but here goes...basically, I am born-and-bred in Auckland and Wellington in New Zealand - and I guess I have developed neural networks optimised to these "type" of cities - both of which are what I would describe as harbour-oriented; that is, they have a definite "front" and a "back" to them. There is a true sense of direction to Auckland and Wellington (and Sydney), in that, the whole city slopes down toward - and is centered about - the harbour. As you get closer to the harbour, the city gets bigger and flashier. With Melbourne though, there is no real centre or focal point to the city - although it has a river running through it and it is close to a significant body of water (Port Phillip Bay), Melbourne really does feel a lot more similar geographically to say, Kuala Lumpur (or perhaps Guangzhou) than it does Sydney. I found Kuala Lumpur hard to navigate also! Despite all this, Melbourne is a lovely place, as I'm sure Bolte and Dunstan would (have) agree(d). I look forward to visiting again (and spending a bit more time) in future. 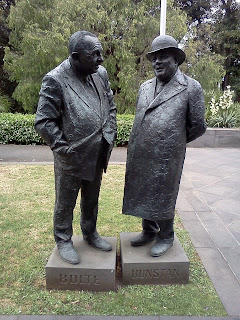 While I was in Melbourne (and sort-of as an extension on the matter of geography) I also visited a family friend - Erjiang (Frank) Fu - at the Australian Bureau of Meteorology. Frank and his colleagues at the BOM are also using Agile, which was interesting, although they are using it mostly for operational purposes. It was interesting to hear about some of the significant GIS (Geographic Information Systems) projects Frank is working on - certainly from an NZ perspective they are much larger than any local GIS initiatives that I am aware of. Frank also tells me that the BOM website (http://www.bom.gov.au/) is within the top-10 most visited websites in Australia - I guess people are pretty keen on the weather in Australia, which is not really surprising given the size and scale of the continent/country and the range of environmental extremes it offers up. 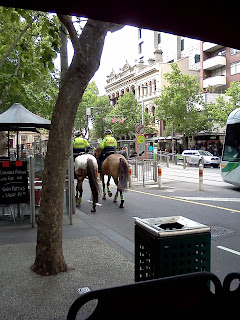 [A: these guys! As one of my daughters pointed out just now "Hey, that's where the horsies drink!"]

So many thanks for your time Nigel and Frank, and thanks Melbourne for showing me an interesting time in the few hours I had to visit.