Agile as an Antidepressant

Ever-soaring anti-depressant usage seems to rapidly be becoming one of the hallmarks of western civilization – at least among the OECD nations. The following chart shows how much antidepressant use has increased across a range of OECD nations in the 10 years 2000-to-2009 (the defined daily dose – DDD – is “the assumed average maintenance dose per day for a drug used for its main indication in adults”): 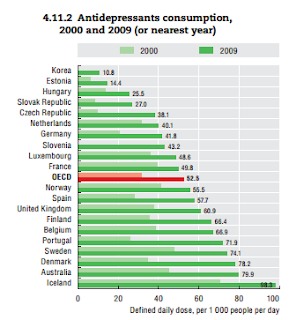 At the same time there is growing evidence that once a certain level of comfort is achieved by a country – as measured by GDP-per-capita (admittedly a coarse and arguably fallible metric) – the level of “life satisfaction” reported by a nation’s people levels off. Currently, according to “The Economist”, the level of income required to reach that point is about $15K (USD) per head.

The blog post associated with the link that I’ve extracted the above chart from, argues that the chart on the right (log scale) is the more accurate one, and that the chart of the left (linear scale) is essentially a “dismal” view of the world. Sure, fair opinion. My opinion though is that that is a dubious attempt to avoid facing the possibility that all of the world’s problems (as perceived by an individual) may not necessarily be solved by acquiring an overabundance of resources (that is, spending power).

Let me qualify my thinking here by saying this post is not about money equality/equity – that’s a whole other discussion. This post is about change and improvement. At this juncture I should also say that I don’t claim to be an expert on any of this; I am making a partially informed observation and offering an opinion.

So, the statistics available on antidepressant use tell us that despite being flush with cash in the west, many of us are pretty unhappy. Increasingly people are looking to alternatives to antidepressants as a way to feel better about their-selves. For example, the following chart illustrates a study that investigated the link between exercise and recovery from depression, versus medication: 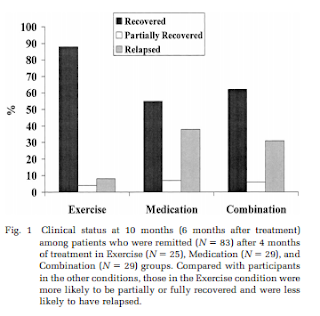 Which brings me to the role of Agile. I have been fortunate enough to have seen in my career the power that Agile has to change the way that an organisation thinks – not just within IT, but at the organisation level. Furthermore, I have the benefit of having come from a non-Agile background; that is, I have seen – and see – how bad things can get. A colleague once told me when I asked him how he felt about a Scrum implementation that he had participated in - “Scrum has made me a more relaxed person”. Of all the comments, statements and motivational speeches I have heard over the years relating to Agile adoption, this one really hit home and has stuck with me – most likely, because that’s how I felt also.

“Scrum [Agile] has made me a more relaxed person”

Proper application of Agile is a lot like regular exercise; Agile gives us many of the psychological ingredients that we need to be able to feel better about ourselves:

Just like regular exercise, Agile may not always go the way we want it to; as is reflected in the pie charts above – although Agile results in a higher percentage of successful project outcomes than Waterfall, it falls short of delivering a successful outcome even 50% of the time. And it can be hard to get Agile right – it takes discipline, practice and commitment. However, like another colleague of mine said once – “Agile is the worst development methodology in the world – with the exception of every other development methodology” (paraphrasing Winston Churchill).

To summarise; I have been fortunate enough to have “seen the light” in terms of product development – it is Agile. For those who work in this field on a day-to-day basis (there are many millions), Agile “done right” I think really is an antidepressant. It is not a pill or a silver bullet; it is a principled approach that can (re)ignite that spark that makes people leap out of bed in the morning, eager to help make the world a better place. Believe it.