Last year Melissa and I visited Sydney and had a wander around for a couple of days. Very pretty city - we didn't have much time, but managed to get a couple of very nice - and relatively inexpensive - DIY walking tours in. 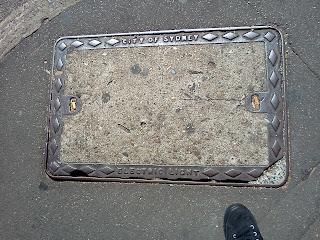 Both tours start and end at Circular Quay (CQ) - so theoretically say, if you were in Sydney on stop-over for 12 hours, you could catch the train from the airport to CQ and start from there.

So, here they are:

Synopsis - this tour takes you on a ferry ride from CQ, under the harbour bridge and around a couple of beautiful old suburbs. Start early/mid afternoon so that you walk back across the bridge about dusk – take in the view of the city at sunset from the walkway across the bridge.

(1) Start a Circular Quay – get a return ticket on Balmain Ferry (about $12): http://www.131500.com.au/upload/docs/sydney-ferry/DarlingHarbour-ferry-timetable.pdf

(2) Jump off at Balmain, find a cafe, have a coffee and a wander around – some nice historical walks: http://www.leichhardt.nsw.gov.au/Library/Local-History/People-and-Places/Walking-Tours/Balmain-Walking-Tours 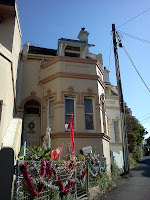 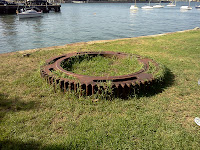 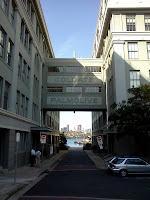 (3) Wander back to the ferry terminal and jump back on the next ferry – ride the ferry around Darling Harbour.

(4) Jump off at Luna Park, go for a swim at the pools and/or check out Kirribilli Village: http://goo.gl/maps/1LUkm 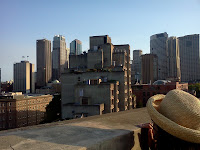 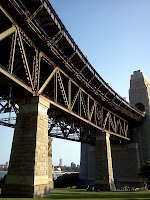 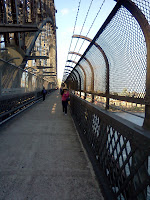 [L2R:
view from the walk _under_ the bridge from Luna Park,
Melissa on the bridge footpath,
Melissa appreciating the view from footpath to city]

Caveat emptor - the bridge footpath is HIGH, and the grill that separates you from the drop is...how can I say this..."rusty"...? I'm not that good with heights and had sweaty palms and a relatively consistent surge of adrenalin the whole way across (I have sweaty palms thinking/writing about it now!). That being said - it is an awesome and relatively easy experience.

(5) Finally, walk back across the Harbour Bridge and through "The Rocks" to CQ.

Here's a very rough map that shows the course we took - you can work out where we jumped on/off the ferry easy enough. A return trip essentially lets you jup off the ferry and then back on again at any stage in the ferry's "loop": 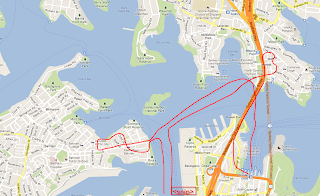 Watson’s Bay and The Gap -

Synopsis - this tour takes you out to Syney Harbour's heads (and back) and includes some delightful walking around the heads - with stunning views from the tall cliffs, and finishes up with a wander through some of the beautiful (and very plush!) old eastern bays suburbs. Do this one starting quite early in the morning, so you get the beach (Bondi) to yourself. We went on a Friday morning, started out about 7:30am.

(1) Catch the bus or train from Circular Quay to Bondi Junction – EOL, not much to see there.

(2) Catch the bus from Bondi Junction to Bondi Beach, find a cafe, grab a coffee (we went to this place - http://goo.gl/maps/JWNTK - "Gusto" - it was very nice, but the muffin that we had hadn't been cooked quite though - delicious nonetheless!) and have a wander along the beach – if you go early, it’s probably going to be pretty empty. 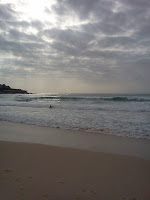 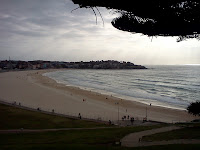 [L2R: early-bird surfers at Bondi and a nice view from South Bondi]

(3) Catch the bus from Bondi to as close as possible to Watson’s Bay – not sure what the bus number is (380?): http://www.sydneybuses.info/network-interchange-maps/east_map.pdf 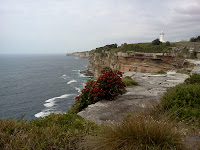 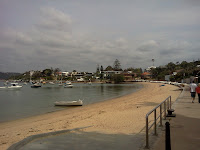 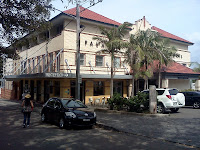 [L2R:
The view across the cliffs close to Waton's Bay and The Gap,
the Watson's Bay Pub,
and finally, Watson's Bay!]

(5) Go to the wharf and get some Fish n’ Chips at Doyles (http://www.doyles.com.au/ - website doesn't seem to be available currently, trust me through, the fish-n-chips is fantastic) and take them on the ferry back to Circular Quay (first ferry leaves about 10:45am).

(6) Jump off at Rushcutters Bay or Double Bay (we were feeling energetic, so got off at Double Bay) and walk back through these beautiful suburbs, into Pott’s Point (King Cross) and back to CQ. 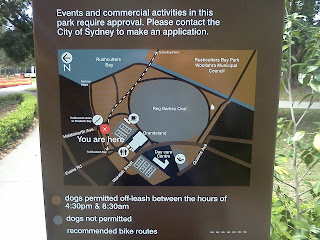 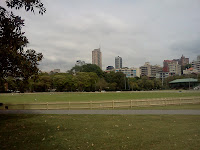 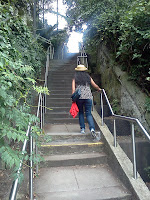 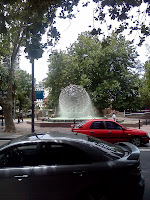 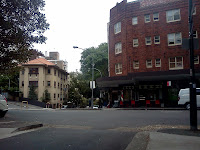 [L2R:
wandering toward Elizabeth Bay from Rushcutters through one of the neat little alleys between the bays,
Elizabeth Bay - neat little cafe area where we stopped and had a coffee and a cake,
King's Cross, spherical fountain]

Finally, here's a(nother) very rough map that shows the course we took - as I mention, the first ferry leaves Watson's Bay (on Fridays at least) at about 10:45am, so there's a bit of time for just wandering about and enjoying your fish-n-chips, or perhaps even a dip in the bay, if the tide is right! 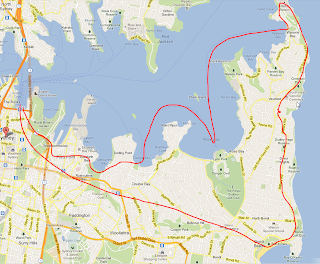 So that's it, dear reader - I hope that if you choose to do one of these tours, that you enjoy it as much as we did. One last point FYI - we went in early December - the weather was very nice, and not too hot.